Important Note: I have heard Bloom in this latest patch causing severe performance issues for some people, so if you get this, turn it off.

Improvements:
- Blueprint menu now checks for correct blueprint version (Blueprints from Experimental version are not available in Public version's BP Library)
- Better sorting in Server Browser: server name, players, ping
- Improved saving of intermediate game states which should significantly reduce the likelihood of losing structures due to crashes
- Holographic screens get now enabled/disabled with structure
- Showing text "No connection to playfield server" if a playfield server hangs
- Added better info to all consumables regarding their use (LMB or Shift+RMB)

Bug Fixes:
- Fixed problem linked to spawning blueprints from Experimental version 1.7
- Fixed: Dying in a turret can lead to "turret occupied" in multiplayer games
- Fixed: SV/HV/CV parked on a slope are sliding away when not unpowered
- Fixed: Turrets don't shoot if spawned with blueprint which had its turrets set to ON when saved
- Fixed: Mirror Tool enables player to build 2 Warp Tanks / Warp Drives for a CV
- Fixed: All blocks but HV Hover Engines removed leads to HV falling through the ground a loop-respawn (MP)
- Fixed problem that when entering cockpit/passenger seat in a very big CV, the terrain did rebuild
- Fixed: CV sometimes shooting at Sathium Asteroid around the Alien Space Station
- Fixed: Offline Protection does not cover irregular/unsymmetrical large bases and CVs
- Fixed Offline Protection exploit: Weapons can pin through the Offline Protection Shield when used in 3rd Person
- Fixed: Possible to place a starter Block within a Offline Protection shield
- Fixed: Moving items from inventory to toolbar could result in an error and the item being deleted (MP only)
- Fixed possible exploit: Control Panel of other player does not close if base is set to faction/private
- Fixed error when client had Control Panel open and server exited
- Fixed: Starting a new game uses last used Save- or Server World Name

Both myself and John had severe FPS dips with Bloom enabled, so definitely worth turning it off.

Things coming in the next update:

The Alpha 2.0 release is getting closer and we want to give you some sneak previews on what you can expect from the upcoming big update of Empyrion.

The following main features will be added to Alpha 2.0:
1. Difficulty Settings for singleplayer and multiplayer games, including different Escape Pod loadouts.
2. Persistent Player-2-Player marketplace. Also adding gold as a new resource and ingame credits as a currency for trading.
3. Upgrade feature for building blocks and devices added to the Remove and Repair tool, now referred to as "Multitool".
4. First set of hangar doors for Bases and Capital Vessels, as well as new and reworked interior doors (e.g. glass door)

The Alpha 2.0 patch is out. I shall be taking the server offline until I can make the changes listed below (for save game compatibility), this is to ensure we don't get any fuck-ups...

For my own reference:

Save Game Compatibility:
Due to our new decoration placement algorithm, we recommend starting a new game in Alpha 2.0. However, you can continue your old save games but you might encounter strange deco placements (e.g. deco on the slopes of mountains etc). To ensure full compatibility you must copy all new playfield.yamls into your save game folder.

Step-by-step guide:
- Suppose your Save Game is called "New_Game"
- Go into the "Templates" folder of your save game, located here: C:\Program Files\Steam\SteamApps\common\Empyrion - Galactic Survival\Saves\Games\New_Game\Templates
- In this folder you will find the templates of all playfields you are currently using in your save game (Temperate, Desert etc). You have to update the playfield.yaml to the new version
- E.g., for the temperate planet Akua you have to replace the old playfield.yaml in Temperate folder with the new version. In particular, copy playfield.yaml from C:\Program Files\Steam\SteamApps\common\Empyrion - Galactic Survival\Content\Playfields\Temperate to C:\Program Files\Steam\SteamApps\common\Empyrion - Galactic Survival\Saves\Games\New_Game\Templates\Temperate

Lots of updates and and upgraded game engine nice.  Good to see they are still working on the game and want to make it better unlike SE which hasn't changed much in 2 years

My thoughts exactly - the devs do seem to be on the ball. Let's hope it stays that way.

Yeah, server will be sorted by Wednesday night at the latest.

It is back up.

I really do hope they fix the issues with Alpha 2 ASAP. It's so weird as well, because I was playing for over an hour, logged off to go get a drink and then the shit hit the fan.

There are threads all over the forums about it, so it should be a high priority for them to fix, since practically no-one can play at present.

Here was a thread I posted in, with a dev response.

Another thing worth reading.

I cant see the threads but does this mean a restart may be required soon?

All up in the air at present. Also Greg, you can use that same Google trick for any blocked site

A restart would not be too bad i suppose as all our blueprints will be safe and you can just give us a starting stash of ore can't you?

I could indeed. I could give us ships, bases, ore, equipment - whatever we decided on really. Thing is, I am not too sure I am ready for a reset yet. I mean, it's taken us 80-odd hours to get this far and would feel like an incredible waste of time to restart right now, just as we are getting self-sufficient and building our "cool shit". Really unsure on the whole resetting right now to be honest, I don't think I have the patience to do it all again so soon.

Resetting will not fix the issue anyway (others have confirmed this).

O ok don't do it then

Do you want to reset then Meg?

Looks like it's all just been patched and fixed.

Cool. It all seems to be in working order, despite the fact that some trees and the like have grown back INTO our base 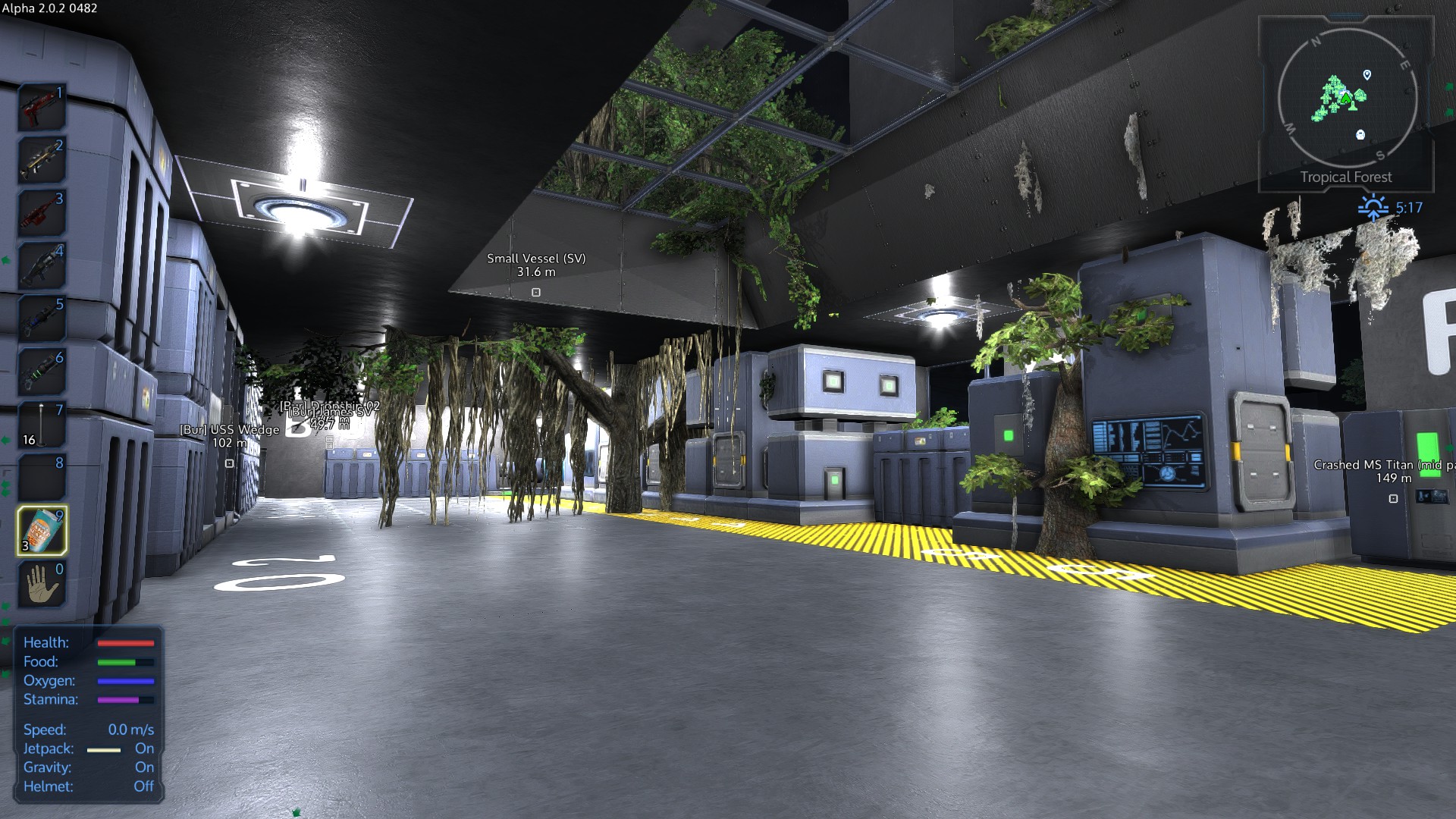 Gives it that connected with nature look.

I thought you would appreciate that Greg.

Today we are releasing the second part of our performance update. As of now, server admins can not only set up rules about their server community being able to use blueprints at all, but also to which degree and to which sizes!

As a short explanation: Performance issues do not result from a ship being built out of 60.000 blocks alone. Performance issues are related to the device count, like generators, thrusters, fuel tanks and so on! That’s why the classes are based on device-count, not on the total block count.

With the new settings, you can now set up rules for the maximum device-count (Classes) of those ships that are allowed to be spawned via the Blueprint Library. (See Changelog below for all the settings)

This does not affect ships already in the game or ships that were manually built up and beyond these limits, but, as it stands now, we might (!) make active use of the device count classes for the upcoming vessel and structure balancings. Feel free to send us your feedback on this specific topic!

We are also going to introduce some more powerful and larger devices, all our builders might find useful.

Version 2.3 adds the new Tier 2 Generator and the Tier 3 tank. Both will not only reduce your structures device-counts, but also reduce the amount of tanks to fill while keeping the same level of fuel packs!

Please note: The new Tier 3 Fuel Tank is kind of temporary, as the UI needs a bit of a feature upgrade to fully feature larger tanks with more than 56 fuel pack slots. As soon as we achieved that, we might downgrade the content of the T3 Tank a little bit in terms of fuel pack slots (so it fits the calculation and balance again), but offer even larger T4 tanks (in size and content) in exchange.

Finally, we improved the visuals of the game by increasing the light intensity on many playfields, making the ambient color less dark, tweaking tone-mapping and the image processing effect.

Please note: these limits are not set in stone and may be changed in the course of development.

- Added global server-side restriction of blueprints being allowed to be used or not (dedicated.yaml).
Available settings:
None = Blueprint system completely disabled
StockOnly = only stock blueprints can be produced
All = all types allowed (default)