Just wondering what your opinions on Torchlight 2 are if you played it and if it is worth getting?

Also i believe you can only buy online but it looks to be quite cheap. Any thoughts?

Yea it looked ok i only played the demo which is free on Steam download it and check it out.

I will not be getting it for a while if i do as i am really enjoying Borderlands at the moment :)

I am VEEEERRRRYYY tempted to get it though - and it means I can alternate between Borderlands and that.

I think I will get it, but maybe not just yet.

My initial views on Torchlight 2

So I have had a few hours play so far and I must say I really like it! It seems to have a far greater potential than Diablo 3 ever had. I tried out the Beserker and the Embermage and liked both.

It has some really nice mechanics to it - lot's of things that I always wished made it to D3. Reminds me of the good 'ol Diablo 2 days. It is definately worth a go when you fancy a break from Borderlands 2.

My thoughts on Torchlight 2 vs. Diablo 3

After playing Diablo 3 to death and becoming very frustrated and bored of it I gave Torchlight 2 a go. I had heard so many good things about it - and boy they were not wrong. Here is my take on it so far:

- Attribute points. Torchlight 2 allows you the freedom to assign your own points, which allows greater customisation, replay value and meaning to all that levelling up. Not only that, but all attributes are useful for all characters. Depending on what kind of character you want to play, you are allowed to tailor it to your liking.

- Skill points. D3 unlocked skills as you levelled up which meant every single other character of your level and class had exactly the same skills available. Torchlight 2 gives you more customisation and makes it feel like you are achieving something.

-Enchantment? Enchantment! You can improve items by paying to have them enchanted, which allows you to breath more life into an item you already like.

-Spell scrolls. Torchlight 2 allows you to pick up certain spell scrolls that are available to all character classes. These range from passive enhancements to certain character areas, to summoning monsters and throwing fireballs. Even your pet can learn and use them! This further increases build diversity (and is really fun). Diablo 3 of course, has none of this.

- Random levels. Diablo 3 made a very half-hearted attempt at this and failed. Torchlight 2 levels really are random. Each new game really feels like a new game.

- Loot. Torchlight 2 drops loot you can actually use, rather than having to play 'D3 - Auction House Tycoon 3' in order to get anything even half-decent without spending your whole life farming. Diablo 3 also has the habit of feeling extremely unrewarding due to so much CRAP being dropped that is never of any use.

- Loot. No, I am not repeating myself. Loot in Torchlight 2 has so much more variety than D3. Diablo 3 loot is boring and same-y. With Torchlight 2, because attributes are useful to all classes in some way or another you are also not pigeon-holed into only looking for items with one stat. e.g. A D3 Barb is only ever interested in Strength and Vitality etc. On top of this, some of the affixes are truly imaginative, useful and fun!

- Offline / LAN play. YOU have control over how (and when) you want to play. Diablo 3 server down? Can't play. Internet down? Can't play. Disconnected from server? ... You get the idea. Torchlight 2 has none of these moronic 'features' and is all the better for it.

- It's your game. No matter what you say, Diablo 3 never really feels like it's yours. Due to it being set up much more like its MMO cousin WOW. The client-server set up may work for WOW, but it does not with a game like Diablo 3. I could repeat all I said in 'Offline / LAN play' here too. Basically, Torchlight 2 is a gamers game and it is YOUR game. You do not have to bend your knee to Blizzard in order to be given the 'privilege' of playing.

- Cost. Torchlight 2 is cheaper. The 'Cost Vs Entertainment' value for D3 is dreadful when you compare it to Torchlight 2.

- End-game content. Diablo 3 has the waste-of-time 'Inferno', which is simply covering everything you have already done AT LEAST 3 TIMES again for absolutely no reason. Torchlight 2 has random dungeons and rewards you for playing.

- Pets. Diablo 3 has followers. These are useless cannon-fodder that do nothing for you. They spout out the same repeated dialog every minute that you have heard thousands of times. The die. A lot. The kill nothing. They achieve nothing. Torchlight 2 has pets. These pets actually have a use. They can run back to town and sell your loot or buy potions and scrolls (thus not breaking a run just to go back and sell stuff), they contribute to fights and they can even be morphed into other animals to become really handy in a tough fight.

- PvP. Diablo 3 promised this and even this long after launch, it is still not here. Torchlight 2 has it and has done since launch. 'Nuff said.

- Economy/auction house. Other than greed, there was no reason for Blizzard to include this in a game that never required (or asked) for it. Even though Blizzard states that you are not required to ever use it if you don't want to, this is simply not the case. When you hit Inferno you have 2 options. 1. Farm for the rest of your life in the (slim) hope you will find some items that benefit you (and probably die of boredom before you do). 2. Head to the auction house and buy the items you need for real money or in-game gold, thus completely ruining the whole point of the game. Torchlight 2 has none of this shite.

Diablo 3 is not a bad game (and I enjoyed my time with it until I hit level 60), but it is not really what it could (should) have been. Basically, Torchlight 2 is the nuts. If you liked Diablo 1 and 2, buy Torchlight 2.

I'll leave you with some memes... 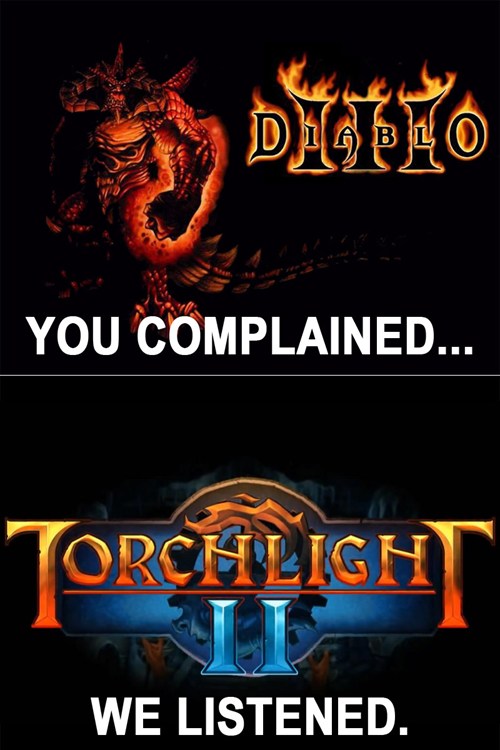 The following are the system requirements for Torchlight II, taken from this page:

I like the sound of this game and may well look at it soon as i am getting a little bored of borderlands 2.

It is a great game but i think i will be giving it a rest soon just what to get my assasin to lvl 50 think i am lvl 41 at the moment.

Interesting... this hsould run on my laptop...!

Originally posted by Andyman:
Interesting... this hsould run on my laptop...!

In which case, give the demo a go. You can download it for free on Steam - it totals about 1.6gb. I think you will like it and as I said, it does not require a monster PC to run

I am now on Torchlight 2 - outlander style.... anyway can't hang round, I have evil monsters to kill and treasure to find, as well as a bit of fishing.

I am levelling a second Embermage up as a frost mage, think I am round about level 25 atm. What level do I need to stop at for some COOPage Maximus?

I don't know i will have to check when i get home i will let you know brrr?

Hit level 52 with my Frosty Embermage last night and completed it on normal. Must say I am really enjoying the Embermage - makes a nice change from playing the Beserker. I forgot just how addictive this game is.

How you getting on Maximus? Have you completed it yet? I didn't want to start new game plus until you had - but if you are miles off then I will.

Sounds like you have got a bit of a hard-on for this one Greg.

Well I am that sort of person. It also happens to be pretty damn awesome - but you being one of these types

, wouldn't know the joy and wonder that it brings to the world.

O contraire mon frère, it just so happens I am about to finish repairing my PC in preparation for some game-full-ness. You see preparation is key, and I am the kind of person, so I might give this one a go.

The only problem is between wanking, building model airplanes and fighting kittens I am not sure where I will find the time.

Ah this is good news! You will finally be returning to the world of gaming proper! When you get it done, throw a post with your Steam name so I can add you and begin gamage of the ultimate variety. Have you been building one from scratch or is this more of a rebuild of your old PC? Thing is, you can get a pretty decent gaming rig for around 400 squid these days that will handle pretty much anything you throw at it. IS NICE!

Just think, you will even have access to Garry's mod again too

And they have made some well cool additions to it. Also, another game you will definitely be interested in is Star Citizen, which looks set to be one hell of a good game. We started a post about this here.

I have an old Dell XPS that died and I have just got round to diagnosing the hardware fault, HDD as per normal.
I would be tempted to get a new pc if it ran supreme commander at full wack; what's good for 400 notes then?

I spoke with Andy about this not long ago, so I will just post 1 of the machines I suggested to him, for you:

A £450 PC.
This site also does some decent ones that are worth a look.

The specs for Supreme Commander are:

Just wondered where you were up to on this one Maximus? I got to level 73 on my Embermage last night and was wondering if some co-op is in order