Back to Programs - Games 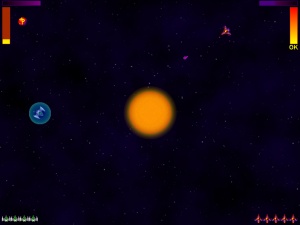 Space Battle is a two player recreation of the classic 'Space War' game. Two players battle in an arena to destroy each other and emerge victorious. This remake has several additional features that can be customised to your liking, including optional gravity, 5 different special weapons and much more.

Each player starts the game with 5 lives. Player scores are kept between matches, and can be reset using the button on the title screen.

Your laser gun has a charge, which will replenish in time (this is to stop you from just firing all the time and hoping for a hit). This is shown by the horizontal bar at the top right and left of the game screen.

Each special weapon has its advantages and disadvantages. Many, if used carefully can be a great help. Be careful though, as some if not used wisely can lead to your own death! Special weapons require energy to use. This energy replenishes in time. Each powerup has its own energy cost, with some more power hungry than others. When your special weapon can be used an 'OK' message will appear just below your energy bar (the vertical bar on the right and left of the game screen).